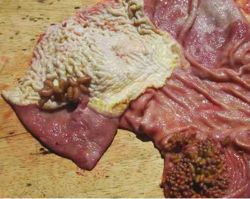 Large masses of G. nasalis attached to the pylorus and G. intestinalis along the margo plicatus. The pyloric opening is completely surrounded and partially blocked by the larvae. (Image courtesy of The Donkey Sanctuary) 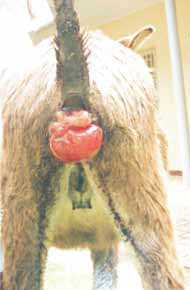 Bots, the larvae of flies, have adult stages that occur externally which could classify them as ectoparasites, and also larvae that live internally that could put them in the endoparasites category.

There are different opinions on the importance of bots in equids and some consider them to be non-pathogenic.

Diagnosis is difficult before bots appear in faeces, though fly eggs on hair may indicate that infestation is likely.

G. nasalis larvae may be closely packed together, blocking the pyloric opening. The prevalence of rectal prolapses from the severe irritation of the larvae attached to the rectal mucosa is quite high and is a problem seen with donkeys in Ethiopia. There is evidence that stomach bots can cause mechanical blockage of the stomach, colic, abscess formation, ulcers and rupture of the stomach wall causing peritonitis in horses (Waddell, 1972).