Gastric ulcer is a round or oval punched out lesion of the gastric mucosa ranging from 1-4 cm in diameter.

There are many disease associations including:

Gastric ulceration is caused by damage to the gastric mucosa through the above mechanisms. NSAIDs directly damage the mucosa and interfere with prostaglandin synthesis. Gastric ulceration is worsened by the use of NSAIDs in combination with corticosteroids. This risk can be minimised by using cyclooxygenase-1 (COX-1) sparing NSAIDs.

Gastric acid hypersecretion following mast cell degranulation of histamine and gastrin secretion from gastrinomas is a major cause of gastric ulceration. 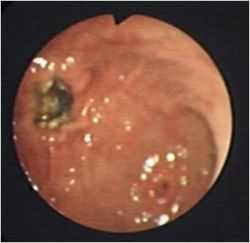 History may involve access to toxins and drugs such as NSAIDs. Clinical Signs can include vomiting, haematemesis, malaena, pale mucous membranes, abdominal pain, weakness, inappetance and hypersalivation which can progress to circulatory compromise.

Anaemia which may be regenerative initially, and can progress to microcytic, hypochromic and minutely regenerative anaemia. A thrombocytosis may also be present. If a stress leucogram (lymphopenia and neutrophilia) is not present this is supportive of hypoadrenocorticism. Examination of the buffy coat may detect mastocytosis. A Neutrophilia and a left shift are indicative of inflammation or gastric perforation. There may also be abnormalities in haemostasis.

Increased liver enzymes and bilirubin, decreased urea, albumin and cholesterol will indicate hepatic disease as an underlying problem. If renal disease is present, an azotaemia will be present on biochemistry. If Hypoadrenocorticism is the cause of the ulceration, it is likely biochemistry will show a Sodium:Potassium ratio of less than 27:1. If the animal is vomiting this will lead to electrolyte and acid-base abnormalities, a metabolic alkalosis, hypokalaemia and hypochloraemia.

Animals will be dehydrated resulting in hypersthenuria. If renal disease is the underlying cause, urine may be isosthenuric. 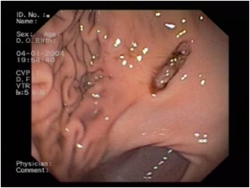 Not usually diagnostic but can rule out differentials such as foreign bodies and peritonitis.

Shows gastric thickening and rules out other differential diagnoses.

Diagnostic test of choice and allows biopsies to be taken. NSAID related ulcers are regularly located in the antrum and there is limited mucosal thickening or irregularity whereas ulcerated gastric tumours will have thickened mucosa and edges. Any biopsies should be taken at the edge of normal and diseased tissue to avoid further deepening or perforation.

The main aim is to treat any primary underlying cause whilst giving general support. This may be hydrating, restoring electrolytes and acid-base and also helping the gastric lining to recover. Anti-ulcerative therapy should be continued for up to 6-8 weeks.

Depends upon the degree of dehydration, presence of shock and any other diseases that are affected by volume. Prolonged vomiting or anorexia may lead to hypokalaemia so KCl may need adding to any fluids given. Normal rates for treatment of shock apply with dehydration being overcome by a fluid rate over 24 hours to replace the deficits along with a maintenance rate.

Omeprazole is the drug of choice to treat ulceration associated with mass cell tumours and gastrinomas. It inhibits the hydrogen-potassium ATPase which prevents hydrogen ion production by the parietal cells.

Such as misoprostol can be given alongside NSAIDs to decrease the risk of ulceration. Sucralfate which is polyaluminium sucrose sulphate, binds to damaged mucosa and assists in the treatment of gastric ulceration. It is best given 2 hours after acid inhibitors to prevent interference.

Prophylactic treatment has been shown not to prevent gastric ulceration. Sucralfate is reported to be the best drug in patients receiving high doses of glucocorticoids.

Anti-emetics are indicated if vomiting is severe causing fluid and electrolyte imbalances and discomfort.

Is best provided by opiods such as buprenorphine, pethidine and fentanyl.

Animals suffering from shock and gastric barrier dysfunction may require prophylactic antibiotic cover. First line drugs include ampicillin or a cephalosporin which are effective against Gram-positive, some Gram-negative and some anaerobic bacteria. These can be combined with an aminoglycoside which are effective against Gram-negative aerobes if sepsis is present. Enrofloxacin can also be used instead of an aminoglycoside in skeletally mature animals.

May be required to investigate or to resect perforating ulcers which may lead to peritonitis.

For animals with peptic ulcers is good. Prognosis is poorer for patients with renal or hepatic failure related ulcers. It is also poor for animals with gastric carcinoma and gastrinoma.