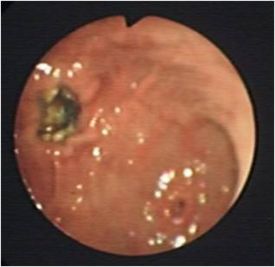 Acute inflammation of the stomach is not uncommon, especially in the dog. The cause is usually the ingestion of substances including foreign bodies, spoiled or contaminated food, toxic plants ,chemicals and drugs (especially non-steroidal anti-inflammatory drugs). Infectious, viral and bacterial causes are thought to exist in cats and dogs but have not yet been identified.

Ingestion of these substances causes disruption of the gastric mucosal barrier. This results in increased permeability, with hydrogen ions and pepsin penetrating the mucosa. An inflammatory response subsequently occurs that may damage blood vessels, resulting in the extravasation of blood and plasma into the gastric lumen. Mucosal erosions can develop due to necrosis of the mucosal epithelial cells.

Gastritis can cause contraction of gastric smooth muscle which causes spasms and pain. Vomiting is also a symptom following stimulation of nerve endings that connect with the vomiting centre.

Dogs are more commonly affected than cats due to their less selective eating habits.

Acute gastritis is a diagnosis of exclusion based on physical examination findings, history of ingestion of causative substances and diagnostic tests.

Include acute vomiting (food, bile together with small amounts of blood may be present in the vomitus), anorexia, polydipsia, lethargy, depression and if severely affected dehydration.

Severely affected animals may show signs of discomfort on palpation of the cranial abdomen.

Clinical pathology such as haematology and biochemistry can be used to rule out conditions such as uraemia, diabetic ketoacidosis, hypoadrenocorticism], hepatic disease, hypercalcaemia and pancreatitis.

Abdominal radiographs may be taken if the animal is severely ill and to rule out other causes such as an alimentary foreign body or obstruction.

Gastroscopy may be used to visualise gastric erosions/ulcers and hyperaemia.

Many different techniques of treating acute gastritis have been described. In general, therapy is designed to rest the stomach by witholding food and maintaining the animal's fluid , electrolyte and acid/base balance.

Witholding food and water for 24 hours is usually sufficient to control vomiting in combination with parenteral fluid therapy to avoid dehydration. Small amounts of a bland diet such as boiled chicken and potato can be offered once the animal has not vomited for at least 12 hours. Gut protectants should be considered if the animal presents with haematemesis. Some examples of gastroprotective drugs include sucralfate which forms a protective barrier over the mucosal surface and also stimulates bicarbonate and mucus secretion and omeprazole which is a proton pump inhibitor that reduces gastric acid secretion.

Anti-emetics can be used but only if vomiting is causing pain or if unsustainable fluid and electrolyte losses occur.

The prognosis is excellent if fluid and electrolyte balance is maintained.