Lizards tend to be bright, alert and responsive, almost inquisitive. Captive-born ones are more tame and docile, and tolerate handling and sometimes relax when being lightly stroked. Wild-caught lizards are often shy, wary and try to escape at the slightest disturbance. 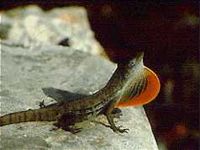 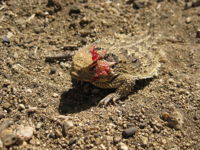 When threatened, iguanas, monitors and other lizards tend to display defensive aggression. They stand sideways to the threat, swallow air to increase their size, stand high off the ground to look bigger and lash at the threat with their tails. Some lizards may display head bobbing and push-ups or gape and threaten to bite.

Defensive behaviour is associated with territoriality, escape from potential predators or may be ritualised with reproduction or feeding. It may be exhibited with humans, conspecifics, other animals or with no stimulation.

Offensive aggression is rare and usually involves sexually mature iguana males during their breeding season from December to March in the northern hemisphere. They may attack anything entering their territory and attempt to bite them. It is recommended that these lizards be confined to their cage during this time.

When several lizards are housed together, aggression and dominance is not always overtly physical since actual fighting may not occur. Subtle behaviour by the dominant lizard may result in the subordinate staying away from basking areas and food and slowly dying of stress-enhanced hypothermia and starvation.