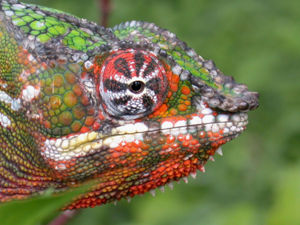 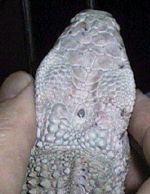 Parietal eye on the dorsum of the head (Copyright © RVC)

Common mydriatics have no effect on the reptilian eye because both the iris sphincter and ciliary muscle contain striated (or skeletal) rather than smooth muscle. This means that they are under conscious control. Therefore, unlike mammals, the consensual pupillary response is absent, the cornea does not contain a Descemets membrane and scleral ossicles are often present. This renders the ocular examination more challenging but more importantly, the parasympatholytic topical drugs (that reduce the activity of the parasympathetic nervous system) used to dilate the pupil mydriasis) in mammals are totally ineffective.

Another characteristic of the lizard eye is its ability to occupy both scotopic (light limited) and photopic (light rich) environments. Indeed, the morphology of the eye adapts and varies according to activity in these different light environments.

The Parietal Eye of a Lizard (Wikimedia Commons)

A well developed parietal "eye" (with a rudimentary lens and retina) is found on the dorsal midline in some lizards, including the green iguana, blue-tongued skink and water dragon.

This sensory organ is connected to the central nervous system and the pineal gland by the small parietal nerve. It functions in hormone production (including reproduction) and thermoregulation (by acting as a light dosimeter). It detects both UV light and heat. Although sensitive to changes in light, it cannot form images. By detecting light and dark it allows lizards to detect the movement of predators. Sometimes referred to as "pineal eye" or "third eye", it it visible as an opalescent gray spot on the top of some lizard's heads.

They are usually present. The lower lid is movable, moving upwards to close the eye; in some lizards, this lid might be transparent, allowing vision even when the lids are closed. Lizard also have a well developed, semi-transparent, highly mobile third eyelid which is called the 'nictitating membrane'; this membrane can close across the eye even while the eyelids remain open.

In some chameleon species as well as some geckos and the oscellated skink (Ablepharus sp.) the eyelids have fused to produce a circular, immobile and transparent dermal aperture called a spectacle. It create an impervious barrier to topically applied medications.

The pupil is usually round and relatively immobile in diurnal species and is usually slit-like in nocturnal species. Geckos, such as the Tokay gecko, have a serrated pupillary opening resembling a series of small holes when the pupil is completely closed. This specificity allows for acute vision even in dim light.