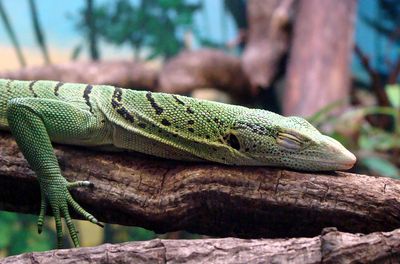 Most lizards seem to hear in the same range as the green iguana (500 to 4,000Hz range), with a sensitivity peak at 700 Hz, equal to about 24 dB. For lizards lacking a tympanic membrane, such as the lesser (Northern) earless lizard (Holbrookia maculata) and many fossorial (burrowing) and semi-fossorial lizards (for example the legless Anniella), hearing is limited to lower frequencies. However, even without a surface or subsurface-mounted tympanic membrane, many "earless" reptiles can indeed "hear", though to varying degrees.

Lizards such as gekkonids can actually vocalize (unlike the rapid expulsion of air resulting in a hiss) and have both high sensitivity and high frequency, up into the 10,000Hz range. Although very few studies have been done on gekkonid vocalization, research seems to indicate that in some species, it may play a role in territoriality and social groupings.

The lizard ear has auditory and vestibular functions. In many lizards the external ear is either absent or greatly reduced (in geckos and monitors) and most species have a superficial tympanum. The tympanic membrane is generally visible and covered with thin transparent skin which is also shed during ecdysis. In earless (Holbrookia maculata) and horned lizards, the membrane is covered with scaly skin.

Iguanids have a tympanic membrane which is nearly contiguous to the surface of the skin whereas it is deeper and recessed in scincids (such as the blue-tongue skink) and agamids (such as the bearded dragon). Lizards have very sensitive ears with delicate eardrums, and, like frogs and birds, a single auditory ossicle, the columella, that is coupled to the eardrum through a cartilaginous extracolumella.

Lizards have middle and inner ears; the tympanic membrane covers the middle ear cavity which is linked to the pharynx and eustachian tube. In general, the inner boundary of the middle ear cavity has two openings: a round one, covered by a thin membrane, and an oval opening that is uncovered.

The stapes (or stirrup) is a single bone that connects the eardrum to the inner ear; it crosses the middle ear cavity, from the inside of the tympanic membrane, its inner end fitted inside the oval opening. The outer end of the stapes has a cartilage cap which comes into contact with the tympanic membrane. In some reptiles, this cartilage, called the extrastapes, is attached to the quadrate (the primary support of the lower jaw). The upper and lower jaws of lizards contain several bones not found in mammals.

The inner ear cavity comprises organs related to balance (the semicircular canals, utricle, and saccule) and hearing (cochlear duct). The cochlear duct and the saccule are both suspended in perilymphatic fluid; the cochlear is also filled with this fluid.