Theileria sp. inside erythrocytes of host

Theileriosis is a disease of mammals and birds caused by a protozoal pathogen which resides within the lymphocytes and macrophages.

T. parva and T. annulata in cattle and T. lestoguardi in sheep are the most economically important in domestic ruminants.

Buffalo, both domestic and wild, appear less susceptible to theileriosis.

Native animals also appear to have a higher degree of innate tolerance in endemic areas than those that are imported, even if of the same breed.

Parturition, lactation and stress can make an animal vulnerable to theileriosis, as they can to any disease.

Age linked tolerance may make younger calves more tolerant of disease than adults in some areas.

Distribution of disease depends on the presence of tick vectors and thus is primarily in tropical regions. Various species of tick are implicated.

The distribution of theileriosis is increasing all the time.

Theileria species first invade the local lymph nodes of the hosts before forming schizonts and disseminating through the lymphoid tissues.

For more information on ticks as vectors, see Theileria and Tick Disease Transmission. 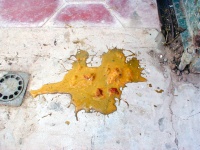 Ocular signs and masses may develop.

Neurological and reproductive signs may develop in chronic or endemic disease.

The degree of pyrexia, pathogen load and host susceptibility will determine the severity of clinical signs at presentation.

Detection of parasite stages in thin blood smears with Giemsa staining. Schizonts should be looked for in thin smears from lymph node or liver biopsies.

On post-mortem examination, blood is watery and carcasses are icteric and gelatinised. Numerous petechiae may be present within the mucous membranes, gut mucosae and heart. The liver is often pale and friable and the gall bladder distended with dark green bile. Ulcers are often evident in the abomasum of ruminants and are surrounded by haemorrhagic zones. Urine is dark brown due to the presence of bilirubin. Pulmonary oedema may be present.

Sporozoites can also be detected within the salivary glands of ticks by staining with methyl-green pyronin and more recently with PCR.

Buparvaquone and Halofuginone chemotherapeutics and/or Tetracyclines are the treatments of choice.

Control of tick vectors and use of tick resistant host species such as zebu cattle in endemic areas is effective but expensive.

Care should be taken when intensively dipping with ectoparasiticides to control ticks as upsurges in other tick borne diseases are not uncommon when programmes are interrupted.

Endemic stability can be encouraged by breeding indigenous or known carrier animals, although these are often still infective for ticks so separation from adult susceptible animals is essential to prevent further spread of disease.

Vaccines are available involving attenuated schizont-infected cells and are the mainstay of tropical theleriosis in endemic countries with highly susceptible cattle breeds.