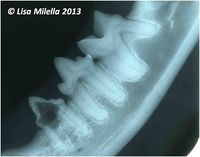 Mandibular radiograph of a cat showing the 3rd and 4th premolars and mandibular 1st molar. The 3rd premolar has a radiolucent area of the crown indicating resorption. The roots are largely unaffected, indicating a type 1 resorptive lesion.© Lisa Milella 2013 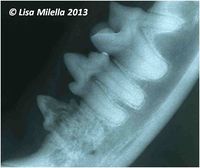 Mandibular radiograph of a cat showing the 3rd and 4th premolars and mandibular 1st molar. The 3rd premolar has patchy radiolucencies of the crown indicating resorption. The roots are a similar radio-opacity to the surrounding bone with loss of the periodontal ligament and dentine structure. This is typical of a type 2 tooth resorption.© Lisa Milella 2013

Radiographs of affected teeth often show root resorption that is far more advanced than expected. Every tooth with a clinical TR should be radiographically evaluated, not only to determine severity but also to determine the type of root changes that are occurring and identify concurrent pathology. Multiple teeth are often involved in affected individuals. Therefore, full mouth radiographs of all teeth may be indicated when a patient is diagnosed with TR. Some practitioners recommend full mouth radiographs of all feline patients to identify pathology that is not yet clinically apparent.

Radiographs of teeth affected with TRs show distinct changes. The roots of some affected teeth seem to “disappear” as they lose radiodense root tissue at a similar rate to the simultaneously occurring osseous repair, effectively making the roots appear to blend with the surrounding bone. The Periodontal Ligament|periodontal ligament and structural details are lost. Other TRs retain areas of normal radiodensity interspersed with radiolucencies caused by resorption and do not lose the detail of the periodontal ligament space and root structures in those areas not directly undergoing resorption. Areas of root resorption are often patchy, remaining radiolucent because the lost root substance is not replaced by reparative tissue. This type of TR also commonly demonstrates concurrent periodontal or endodontic disease.

Tooth resorption in the canine teeth of cats often shows areas that appear to be combined type 1 and type 2. Over time it becomes more evident on radiographs which areas will be replaced and which are associated with pathology.

There are a number of staging systems in the literature for recording the severity or extent of lesions. Of these, the most logical and clear one categorizes TRs by severity according to objective and easily determined observation that places them into stages that may have clinical relevance.

Radiographic evaluation allows both the type and stage of a lesion to be determined, both of which can be easily recorded on the patient’s dental chart.

Similar to cats and other species, dogs are affected by TRs from both known causes (most commonly periodontal or endodontic infection or inflammation) and from unproved etiology. The (currently) idiopathic TRs are far less prevalent than the feline lesions and appear very similar to the idiopathic type of TRs in cats. Type 1, type 2, and combined TRs are found in dogs, and they can be staged using the same criteria that are used to stage feline TRs.