Reabsorption and Secretion Along the Loop of Henle - Anatomy & Physiology 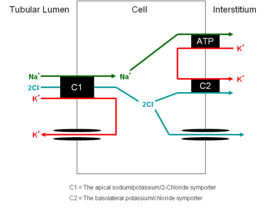 Exchange in the Thick Ascending Limb of the Loop of Henle

The urea from the collecting duct enters the medullary interstial fluid and diffuses into the loop of henle. As it passes back up the ascending limb of the loop of henle and reabsorption of other ions occurs the urea becomes even more concentrated. This recirculation can occur several times and steadily increases urea concentration in the medullary tissue until equilibrium is reached. If water conservation is important this equilibrium is not reached until the urine is more concentrated and urea makes up 40% of the interstial osmolarity. The overall aim of this recirculation is to excrete a high concentration of urea in very little water. 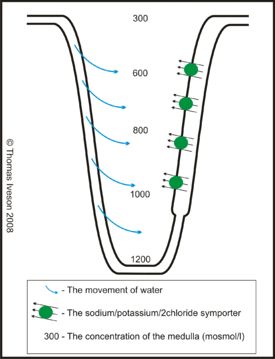 Movement of ions and water in the counter current system 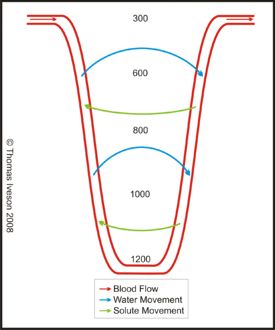 Movement of ions and water in the Vasa Recta

As the thin descending limb makes its way into the medulla the surrounding tissue becomes ever increasingly hypertonic and therefore the osmotic gradient increases the deeper the limb goes. As the limb is permeable to water it leaves the tubule via osmosis. The tube then bends back on itself and heads back up the cortex. The thin ascending limb is entered. Here salt enters the tubule passively due to the hypertonicity of the medulla creating a gradient. This results in a very high salt concentration at the bottom of the loop. The fluid moves on and enters the thick ascending limb. This has salt transporters and so salt is pumped into the medulla via active transport causing more water to leave the thin descending limb. The vasa recta has a similar countercurrent uptake system and only removes what is absorbed maintaining the medulla in a hypertonic state.

This is a challenging concept which is hard to explain. It is explained below in a different way:

When there is excess water in the body, the excess fluid passes through the loop of henle because the fluid entering the loop is less concentrated already. The solutes only have so much osmotic potential and therefore are unable to draw the excess water from the lumen. This contributes to allowing the kidneys to produce dilute urine.

Water, salts and urea can pass freely across the capillary walls of the vasa recta and therefore as the vessels reach deeper into the medulla where the interstitum surrounding them becomes more hypertonic, the blood inside them in turn becomes more hypertonic. As the blood ascends back out of the medulla, the osmolarity reduces until it is only slightly higher than when it entered. The conclusion drawn from this is that the solutes which are reabsorbed from the fluid mainly remain in the surrounding tissue and maintain the concentration gradient. If the system was not arranged in loops then this would not be possible. Although the blood leaving the medulla is always slighty more concentrated than when it entered upon reaching the cortex, if the urine being produced is very concentrated, it actually becomes hypo osmolar as more water than salt is being reabsorbed in the distal tubules which reside in there. Overall the osmolarity of the blood decreases when concentrated urine is being produced and increased when dilute urine is being produced.

The anatomy of the vasa recta can be found here

Use the flash card revision resource for this section to test yourself.