Snakes are the most recently evolved group of reptiles and have numerous specialisations that distinguish them from other squamates (scaled reptiles). Their musculoskeletal system is adapted for creeping, burrowing, swimming and gliding. Chemo and thermoreceptors are a key feature in their methods of predation, in addition to extreme cranial kinesis and, in some species, deadly venoms.

Snakes are members of the class Reptilia and order Squamata (scaled reptiles). Squamata is made up of the suborders Serpentes (snakes) and Sauria (lizards). Snakes are the most recently evolved group of reptiles. Their fossil record is limited due to their fragile skeletons, however recent discoveries of early fossil snakes with posterior legs has generated debate about the origins of their evolution. 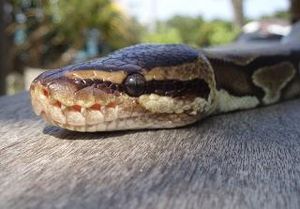 Snakes commonly presented in practice are non-venomous and come from two diverse families - Colubridae and Boidae.

Colubrids are the largest family of snakes. Common examples include milk snakes, kingsnakes, rat snakes, corn snakes and garter snakes. All are rodent eaters in captivity and oviparous except for garter snakes that eat fish and invertebrates and are viviparous.

Identification can be difficult, given the range of species. However, these are the most common snakes you are likely to see in practice.