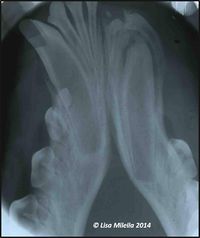 Abnormalities in development and eruption may occur and can cause clinical problems if not diagnosed and treated.

Congenitally missing teeth are common findings in dogs. Missing teeth may be of no functional significance to the patient, but radiographs should be taken to prevent a misdiagnosis of an unerupted or impacted tooth, which may lead to further problems, such as obstruction of the nasal passages or the development of a dentigerous cyst.

Teeth that are missing either never developed or failed to erupt. These disturbances may be inherited but may also be acquired or idiopathic. They may be congenital or may occur later during the formation of the tooth.

Teeth may be truly absent as a result of an inherited abnormality or as a result of disturbances in the formation of the tooth during the initial stages of development. A complete absence of teeth is known as anodontia, which is very rarely seen in dogs. Hypodontia, the absence of a few teeth, is relatively common in dogs and is seen in many breeds. The premolars appear to be the most commonly affected teeth. In people, anodontia has been associated with ectodermal dysplasia. This may be similar in hairless breeds which often present with missing or malformed teeth. An unerupted tooth may be unerupted due to the presence of thick fibrous gingival tissue. The teeth most commonly affected are the first premolars. A radiograph should be taken to confirm the presence of the tooth. If a tooth is present a procedure called an operculectomy (excision of gingival tissue) can be performed to allow crown exposure and further eruption of the tooth.

A dentigerous cyst is a developmental odontogenic cyst and can exhibit as missing teeth.

Extra teeth may be a hereditary condition. The most commonly affected teeth are the maxillary incisors and premolars.

Extra teeth can result in overcrowding, and as a result making the area more prone to plaque accumulation and the resulting periodontal disease.