From WikiVet English
Cheyletiellosis
Jump to navigation Jump to search 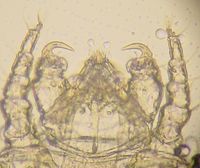 Cheyletiellosis in a Labrador Retriever (from Uwe Gille (2008), Wikicommons]

Cheyletiellosis is a contagious disease caused by Cheyletiella sp. The mites live on the skin surface causing itching and scale on affected animals. Transmission is mainly by direct contact but the mites can also be transported between animals via a flea or lice. It is a zoonotic disease.

Cheyletiella mites are surface mites of dogs and cats. They are also found on humans and rabbits. They cause Cheyletiellosis, a parasitic skin infestation.

They have a waisted body and claw like palps on their heads. They also have combs at the ends of their legs.

The lifecycle of a Cheyletiella mite lasts 21-35 days on the host. The adults mites can survive off the host for 2-14 days. They live on the skin surface and their eggs are attached to hair shafts.

C.yasguri- Most commonly found on dogs.

C.blakei- Most commonly found on cats and humans.

C.parasitivorax- Most commonly found on rabbits.

Occurs in dogs, cats, rabbits, humans and wild animals. There is no breed, sex or age predisposition but it is often seen in puppies probably due to management reasons.

A diagnosis can be made on history and clinical signs in combination with demonstration of the parasite. Scurf can be brushed onto dark paper and 'Walking dandruff' will be seen as mites will move when present in large numbers.

The parasite can also be identified microscopically from skin scrapings, coat brushes and hair plucking form scaly areas. Eggs may also be present on the animal which can be examined microscopically.

Sometimes cases may be asymptomatic. In dogs hyperkeratosis of the skin occurs and dry, white, scaly dandruff can be seen along the back of the animal.

Marked pruritus is sometimes present which in severe cases can be confused as neurological disease. In cats pruritus is also a common feature with the presence of scale and papules. Miliary dermatitis is a commmon finding normally on the neck or back of the cat.

Grossly: Focal, multifocal or generalised red papules or crusts occur often along the dorsum of the animal. Microscopically: Superficial perivascular dermatitis is present with infiltrating eosinophils.

All in contact animals should be treated. The environment the animal has been living in should be cleaned and also treated. Amitraz (Aludex), baths for 3-5 weeks or selenium sulphide shampoos are effective against the mite. Ivermectin is also good when used three times two weeks apart. Fipronil spray (Frontline)is also useful as it helps remove an infestation when used in combination with other treatments.

If the animal has any secondary skin pyoderma following intense scratching this should also be treated with antibiotics.

Good, will resolve with treatment as long as the animal does not become re-infested.