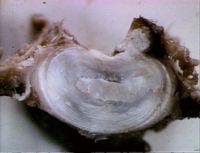 The term 'Intervertebral Disc Disease' (IVDD) refers to several pathological processes involving the intervertebral discs. It is common in the dog, and certain breeds of dog have a genetic predisposition to early-onset IVDD. Any disc in the spinal column may be affected with the most prevalent clinical signs resulting from lesions in the cervical, thoracic or lumbar discs.

In chondrodystrophic breeds such as the dachshund and the bassett hound, the nucleus pulposus undergoes chondroid degeneration. These breeds are genetically predisposed to such pathology and changes such as mineralisation are normally apparent in more than one disc by the time the dog is one year old. The abnormal disc may bulge, chronically impinging on the ventral cord and producing slow onset of clinical signs. However dorsal extrusion of the degenerate nucleus pulposus - which ruptures through the annulus fibrosis into the spinal canal - can occur at any point, causing acute spinal cord trauma. The initial impact of the nucleus causes contusion of the spinal cord, and the extruded nucleus continues to compress the cord. This is known as Type I (Hansen) IVDD.

Type I IVDD most commonly occurs in small and chondrodystrophic breeds, but it can occur in any dog. It is most likely to occur in young to middle-aged dogs. Clinical signs are acute in onset. Neurolocalisation will depend on which disc is affected but the classic signs are a T3-L3 myelopathy (the most common localisation) are a non-ambulatory pelvic limb para-paresis and poor paw placement (proprioception). Withdrawal reflexes may be absent or abnormal, deep pain perception may be absent, and patellar reflexes may be absent or abnormal (e.g. crossed extensor reflex) dependent on the location and severity of the lesion.

Type II IVDD is more common in older, large breed dogs such as the German Shepard Dog. IVDD type II involves fibroid degeneration of the nucleus pulposus and protrusion of the annulus fibrosis. Over time the fibroid tissue in the disc is replaced by collagenous tissue. At the same time, hypertrophy of the surrounding annulus occurs, causing progressive compression of the spinal cord. Mineralisation of the discs is rare.

This vascular disease is typically seen in young medium to large breed dogs but it can occur in any dog or cat. It occurs when a fibrocartilagenous embolus causes an infarction of the spinal cord parenchyma.

It is typically peracute in onset and clinical signs are non-progressive, with a classic history of a dog jumping for a toy, yelping, and collapsing with paresis. The disease is non-painful as no pain receptors are present in the spinal cord parenchyma.

Explosive disc is the low volume, high velocity traumatic extrusion of the normal nucleus pulposus. This causes a non-compressive contusion injury to the spinal cord. The signalment, clinical signs and history are normally similar to FCE, with the dog presenting with a non-progressive paresis of peracute onset.

Once this has been achieved imaging modalities can be used to further localise and classify the lesion.

Survey radiographs should be taken to identify any signs of intervertebral disc disease. These signs include:

Radiographs are normally taken when the animal in anaesthetised to allow appropriate positioning. Lateral and ventrodorsal views should be taken. Should these radiographs fail to demonstrate the full extent of the lesion, a CSF sample should be taken to provide more information.

Myelography involves injection of non-ionic contrast medium into the subarachnoid space, which outlines the spinal cord. It should be performed in all cases which showed no clear signs on survey radiographs, cases where the survey radiographs do not match the clinical signs, cases where the extent of the lesion is unknown and any potentially surgical cases. The procedure should be performed under general anaesthesia - often the animal will be moved directly to theatre following myelography. Myelography can identify the lesion and confirm IVDD:

1) Extradural - The contrast medium bulges towards the cord - this is the sign you would expect to see in Type I and II IVDD.

2) Intramedullary - The contrast lines are further pushed apart by an intramedullary lesion. This pattern is seen with FCE. Common differentials are neoplasia and spinal cord oedema.

3) Intradural-extramedullary - The contrast medium surrounds the lesion in these cases, producing a fork-shape in the contrast line. This is most commonly caused by a nerve root tumour.

MRI is the gold-standard for identifying IVDD, however it is generally only available in referral hospitals and is very expensive.

With Type I IVDD you may consider immediate referral. Providing there are no cost constraints, performing prompt surgery to relieve the pressure on the spinal cord results in an improved prognosis and specialist referral units are equipped to do this. Conservative treatment may be considered if signs are mild (presence of mild pain) and non-progressive, if performing surgery is against the owners wishes or there are significant cost constraints. Type II IVDD is treated in the same way as type I but as clinical signs are less acute, a rapid decision about the choice of treatment is rarely necessary.

The surgical procedure performed depends on the location of the lesion. The procedure performed on a thoracolumbar lesion is a hemilaminectomy. A ventral slot is performed on cervical lesions. Generally a fenestration is made in the vertebral canal and the extruded disc material is cooped out to relieve pressure on the spinal cord. Prophylactic laminectomies may be performed on unaffected discs to prevent recurrence.

Post-operatively, it is essential that the dog is placed on a program of strict cage rest and physiotherapy for a minimum of 6 weeks. NSAIDs may also be given.

The aims of conservative treatment are to:

This involves strict cage rest for a minimum of 6 weeks, very short lead walk and physiotherapy. NSAIDs may also be given.

FCE and 'explosive disc' are non-progressive and the appropriate treatment is supportive care (management of the recumbent animal), time and physiotherapy.

Prognosis for IVDD type I depends on the severity and duration of clinical signs and the treatment options. If deep pain sensation is present and surgery is performed immediately then prognosis is good. Prognosis worsens the longer deep pain is absent - prognosis is grave with a loss of deep pain longer than 48 hours.

Type II IVDD prognosis depends on the severity of the presenting signs, but as there is a more chronic loss of function recovery is slower and some functional deficits may never be regained.

Prognosis for FCE and explosive disc can be judged on the level of deep pain sensation and LMN function. Although clinical signs may look bad (especially to the owners), dogs with appropriate deep pain sensation have the ability to make an impressive recovery.