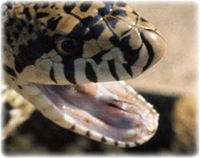 The mouth of a snake can open widely by the independent movement of the jaws to accommodate relatively large prey. The mucous salivary glands moisten the mouth, lubricate prey, aid digestion and excrete salt. Venom glands that produce toxins to kill prey are modified salivary glands. The sheathed tongue lies in a diverticulum on the floor of the mouth ventral to the glottis. It functions for vomeronasal chemoreception and plays no role in swallowing, during which is is retracted into the sheath. Snakes that lose their tongues may not feed. The surface epithelial layer or the snake's tongue is periodically shed intact and is often seen in the water bowl. The oral mucosa of snakes is paler than that of mammals since the PCV may be about half to two thirds that of mammals.

The oesophagus is distensible to accommodate relatively large prey (for a list of diets, see snake diet). The cranial oesophagus is thinly muscled. At the level of the heart, the oesophagus passes through the vascular ring formed by the left and right aortae. It possesses longitudinal folds and is covered with a columnar ciliated epithelium. The oesophagus terminates as the cardiac sphincter. The thick-walled, spindle-shaped stomach is muscular and distensible. The small intestine is relatively uncoiled but has several short transverse loops tightly enveloped by dorsal mesentery. It empties into the colon that may store faeces. The large intestine is relatively wide and is separated from the cloaca by a distinct fold. A small caecum projects from the proximal colon in Boidae.

Liver and fat body of a Burmese python - (Copyright © RVC)

The cloaca is divided into three parts (cranial to caudal): coprodeum, urodeum and proctodeum. The coprodeum collects faeces from the colon. The urodeum, which is the midsection of the cloaca, collects urinary waste and products of reproduction. The urogenital papilla is situated dorsally behind a small fold. The proctodeum is the reservoir for faecal and urinary waste before excretion and contains the openings of the cloacal scent glands.