Most species of snakes show no sexual dimorphism and other methods are necessary to differentiate between males and females. 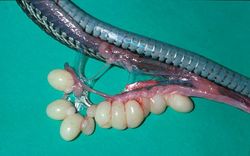 The reptilian ovary consists of follicular cells, epithelial and endothelial cells, nerve tissue and connective tissue in an elastic tunic. The ovaries of snakes are elongate and are located near the pancreas/spleen/gall bladder, cranial to the kidneys. The right ovary is cranial to the left but may overlap. Both ovaries are present. Some fossorial species have lost one ovary and oviduct. 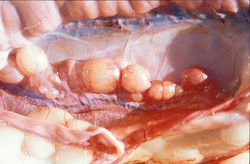 The oviduct is divided into infundibulum, magnum (secretes albumin), “uterus” (secretes membrane and in some species of viviparous snakes serves for placentation) and vagina. There is a region of mucosal folds and alveolar glands in the cranial oviduct, the receptaculum seminis, that serves for sperm storage allowing continued fertility from one insemination. The oviducts empty into the urodeum through the urogenital papillae. The developing embryos or eggs in the right side are carried anterior to those on the left. The left oviduct may be lacking in some taxa of snakes including Typhlopidae.

The testes are usually elongated and light-coloured, and consist of seminiferous tubules, interstitial cells, blood vessels and connective tissue. They are situated intracoelomically generally between the pancreas/spleen/gall bladder and the kidneys with the right cranial to the left (see snake excretion). Their size is dependent on the season. An epididymis may be lacking. Sperm may be stored in a bladder-like structure formed from part of the ureter. Sperm is produced in the seminiferous tubules, transported in the Wolffian ducts and discharged at the base of the hemipenes.

The posterior part of the kidneys of most male snakes is sexually dimorphic. A portion of the distal tubules, called the "sexual segment", shows a seasonal enlargement and cellular changes. A phospholipid secretion is produced here and is incorporated into the seminal fluid.

Male squamates have paired copulatory organs called hemipenes. These are caudal extensions of the cloaca, except in Ramphotyphlops spp.

The hemipenes are located in the invaginations at the base of the tail and are held in place by a retractor muscle. The functional surface of the hemipenis is the lumen of this cavity. The paired openings of the hemipenes are just inside the mucocutaneous junction and one fourth of the way medially from the lateral corners of the vent. For copulation they evert through the vent, which is the external opening of the cloaca. The hemipenes may have protuberances that help grip the female and there is a surface groove, the sulcus spermaticus, involved in the propulsion of semen.