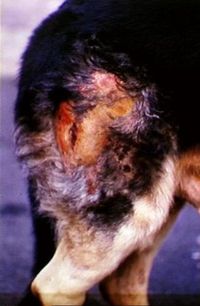 Superficial pyoderma describes cutaneous bacterial infection that is confined to the stratum corneum of the interfollicular skin and hair follicles. Normal skin is colonised by a variety of resident bacterial and fungal organisms. They are not normally pathogenic and sometimes help prevent colonisation of pathogenic species through niche competition. Potentially pathogenic coagulase-positive Staphylococci colonise mucocutaneous junctions and mucosal reservoirs are an important source of infection.

Changes to the microenvironment of the skin lead to the development of conditions favouring the growth of these pathogenic staphylococci. Inflammatory reactions to bacterial products can lead to further multiplication of bacteria.

Superficial pyoderma may be a primary condition, but this is rare, and most recurrent pyodermas are secondary to underlying cutaneous and systemic disorders such as ectoparasites, hypersensitivities, endocrinopathies and keratinisation defects.

Superficial pyodermas are not usually pruritic, although some dogs exhibit marked pruritus presumably due to a hypersensitivity to the bacteria.

Folliculitis: which is the most common form of pyoderma. Pustules and papules associated with the follicles, patchy alopecia.

Superficial spreading pyoderma: characterised by an absence of pustules and large, spreading epidermal collarettes with an erythematous, moist leading edge. This can result in large areas of erythema and exfoliation.

Mucocutaneous pyoderma: erythema, exudation, ulceration and crusting of the lips and other mucocutaneous junctions.

The clinical signs are highly suggestive, although they do sometimes resemble ringworm and a fungal culture might have to be performed to exclude it.

Biopsy and histopathology can help confirm or rule out underlying conditions and may reveal an intraepidermal pustular dermatitis, or a superficial suppurative folliculitis.

Samples for culture and sensitivity should be taken if: rods are seen on cytology, the lesions do not resolve following empirical antibiotic therapy, there are non-healing wounds.

Topical therapy can be used to soften and remove crusts and improve pain and pruritus if present. Topical antibiotics might be useful in certain areas such as the mucocutaneous junction, ears and feet. Fusidic acid has been used with success.

Systemic antibiotic therapy should be given for a minimum of 3-4 weeks and should be continued one week past clinical resolution.

If the pyderma is recurrent, antibiotics should be continued for a minimum of 6-8 weeks, with reexamination determining whether treatment can be stopped.

Relapsing pyodermas should be worked up fully as most are secondary to an underlying condition such as parasite infestations, allergies, endocrinopathies and keratinisation defects.

Harvey, R. (2009) A colour handbook of skin diseases of the dog and cat Manson Publishing