From WikiVet English
(Redirected from Tests of Coagulation) 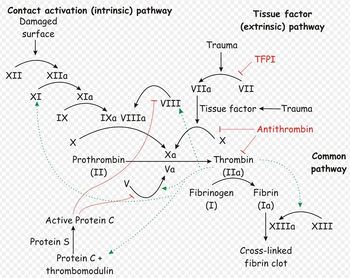 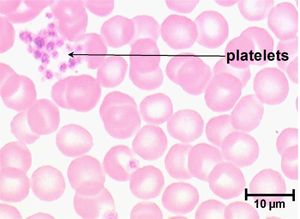 Abnormalities can develop in any of the components of haemostasis. Disorders of primary haemostasis include vessel defects (i.e. vasculitis), thrombocytopenia (due to decreased production or increased destruction) and abnormalities in platelet function (e.g. congenital defects). These lead to the occurence of multiple minor bleeds and prolonged bleeding times; petechial or ecchymotic haemorrhages may be seen for example, on the skin and mucous membranes, or ocular bleeds may arise. Generally, intact secondary haemostasis prevents major haemorrhage in disorders of primary haemostasis. When secondary haemostasis is abnormal, larger bleeds are frequently seen. Haemothorax, haemoperitoneum, or haemoarthrosis may occur, in addition to subcutaneous and intramuscular haemorrhages. Petechiae and ecchymoses are not usually apparent, as intact primary haemostasis prevents minor capillary bleeding. Examples of secondary haemostatic disorders include clotting factor deficiencies (e.g. hepatic failure, vitamin K deficiency, hereditary disorders) and circulation of substances inhibitory to coagulation (FDPs in disseminated intravascular coagulation, lupus anticoagulant). If fibrinolysis is defective, thrombus formation and infarctions may result. Thrombus formation may be promoted by vascular damage, circulatory stasis or changes in anticoagulants or procoagulants. For example, ATIII may be decreased. This can occur by loss due to glomerular disease or accelerated consumption in disseminated intravascular coagulation or sepsis.

It is therefore important that all aspects of haemostasis can be independently evaluated. This will help to identify the phase affected and to pinpoint what the abnormality is. There are tests available to assess primary haemostasis, secondary haemostasis and fibrinolysis.

Primary haemostasis is dependent on the activity of platelets and, to a lesser extent, the blood vessels themselves. Platelets are the smallest solid formed component of blood, and are non-nucleated, flattened disc-shaped structures1. Their activity leads to vascoconstriction and the formation of platelet plugs to occlude vessel defects. Platelets develop in the bone marrow, and have a life span of around 7.5 days. Around two thirds of platelets are found in the circulation at any one time, with the remainder residing in the spleen1.

A platelet count can give valuable information in all critically ill animals and is an essential laboratory test for patients where there are concerns about abnormal bleeding. Platelet numbers may be rapidly estimated by examination of a stained blood smear, or quantified by manual or automated counting techniques. Platelet clumping can give an artificially low platelet count when using manual or automated counting methods. To estimate the platelet number using a blood smear, the slide should first be scanned for evidence of clumping that would artificially reduce the count. The average number of platelets in ten oil-immersion fields should be counted, and a mean calculated. Each platelet in a high-power field represents 15,000 platelets per microlitre2. A "normal" platelet count therefore gives around 10-15 platelets per oil-immersion field.

The reference range given for platelet number is usually around 200-500x109 per litre, although this varies depending on the laboratory equipment used. Clinical signs due to thrombocytopenia are not commonly encountered until the platelet count drops below 50x109/l, when increased bleeding times may be seen. Haemorrhage during surgery becomes a concern with counts lower than 20x109/l, and spontaneous bleeding arises when platelets are fewer than 5x109/l2. These cut-offs are lowered if platelet function is concurrently affected by other factors such as the use of non-steroidal anti-inflammatory drugs1.

The buccal mucosal bleeding time is a simple test that gives a rapid assessment of platelet function, providing platelet numbers are normal. If platelet numbers are below 50x109/l, this test should not be performed since the results will be affected by thrombocytopenia, making them unreliable. The small wound inflicted may also not stop bleeding easily.

To perform the BMBT test, a standardised tool producing a uniform incision is used to incise the buccal mucosa of the upper lip2,3, and the time between making the incision and the cessation of bleeding is measured2. During the procedure the lip should be kept turned outwards, with excess blood being gently absorbed at a site away from the incision, without disturbing clot formation or applying pressure. Normally, bleeding should stop within 3 minutes, and a BMBT of greater than 5 minutes is considered prolonged2.

Acquired platelet function abnormalities can be drug induced, for example by non-steroidal anti-inflammatory drugs2,3, or can be secondary to uraemia. Hereditary defects in platelet function also exist, and von Willebrand's disease is the most common of these.

The BMBT is influenced by all the aspects of this phase, including vasoconstriction, platelet adherence and plately aggregation. Although this makes BMBT an effective screening test for the vascular/platelet (primary) phase of haemostasis, it also means it is not purely a test for thrombocytopathia, as it is often considered: BMBT depends on an intact vasospastic response and adequate platelet numbers as well as platelet function3. BMBT is a fairly crude test, and has been found to be normal in some patients with a known platelet function disorder and vice versa3. The results of this test therefore should be interpreted with some caution.

The activated clotting time (ACT) allows rapid evaluation of secondary haemostasis. The ACT is the time taken for 2ml of fresh whole blood to clot in a tube with a contact activator (diatomaceous earth2), but an automated analyser can perform a test with a similar principle. The reaction must occur at body temperature to give a reliable indication of haemostatic ability: this can be achieved by the use of a warm water bath, or in an emergency by holding the tubes under an arm.

The contact activator used in the ACT test triggers the intrinsic pathway, and so ACT allows assessment of the intrinsic and common pathways. ACT will therefore be prolonged when factors I, II, V, VIII, IX, X, XI or XII are deficient or abnormal, such as in DIC, liver disease, vitamin K antagonist toxicosis or haemophilia A or B2. Thrombocytopenia may also increase ACT.

The APTT measures the time necessary to generate fibrin from activation of the intrinsic pathway3. It therefore assesses functionality of the components of the intrinsic and common pathways of coagulation. The test is performed on citrated plasma, and so blood should be collected into a sodium citrate tube if the APTT test is to be undertaken. Once a sample is obtained, factor XII is activated by an external agent that will not also activate factor VII, such as kaolin1, 3. Since the intrinsic arm of the cascade requires platelet factors to function, the test also provides a phospholipid emuslion in place of these factors. Calcium is added, the preparation is incubated, and the time for clumping of kaolin is measured. Classically, partial thromboplastin time was measured after activation by contact with a glass tube, but use of an external activating agent in the newer, "activated" partial thromboplastin time method makes results more reliable3.

APPT evaluates the same pathways as ACT, and so will be prolonged by abnormalities or deficiencies in factors XII, XI, IX, VIII, X, V, II or I. However, APTT is not affected