There are several different types, or formats, of manufactured pet food including wet (can, pouch, tray), dry (known as biscuits or kibbles) and complementary treats (see section How Pet Food is Made). The method of production and the ingredients used vary according to format.

The variety of products on the market is enormous. While each producer will have their own recipes, there are pet food safety standards and regulations that everyone must comply with (See sections How Pet Food is Regulated and How Pet Food Is Made).

Safe cooking methods and strict quality and food safety standards for raw and finished products ensure that manufactured pet food is free from microbial contaminants such as Salmonella.

Manufactured pet foods always have a feeding guide/instructions to help the owner ensure the animals are fed the correct amount of calories for its life-stage and lifestyle. Feeding guides (instructions) are based on recognised scientific standards that take into account the nutritional profile of the product to estimate energy density and hence the correct amount to feed on a daily basis.

In the field of human nutrition, products are increasingly labelled as ‘free from’ to guarantee absence of real or perceived problematic ingredients. Criticism often surrounds ingredients that are thought to be allergenic, ethically not acceptable or fit within the current nutrition trends. The list of ingredients is not conclusive and topical “free from” ingredients are constantly being added often based on human food trends.

Background: Gluten is present in various grains such as wheat, rye or spelt and may cause coeliac disease in humans, which is an auto-immune disease with a prevalence of less than 1%[1]. Nevertheless, some people do increasingly avoid products containing wheat. The increased demand for gluten-free products in human nutrition even led to instances where products naturally free from gluten were marketed at higher price as being gluten-free. This demand and owner expectation has also extended to pet food although gluten-intolerance strictly speaking does not exist in cats and dogs.

A special case, known as gluten enteropathy, is found in the Irish setter, where a rare hereditary disease affected certain lines of Irish Setters in the past. Puppies after weaning showed diarrhoea, small intestinal pathology, wasting and delayed growth. The symptoms settled and puppies grew normally when wheat gluten was removed from the diet. Many pet owners, therefore, still deem wheat gluten as being unhealthy although the disease is no longer prevalent and is also uncommon in other breeds. For the majority of dogs, it is not clear what benefits a gluten free diet really brings.

Background: Mammals in the wild typically have no or little access to breast milk after weaning. The activity of lactase in consequence declines over time. Humans often continue to consume milk, typically cow’s milk with a high lactose load that keeps lactase activity high. However, 15-20% of the world population is lactose intolerant, due to low or no lactase production. Undigested lactose subsequently leads to various digestive problems. Eliminating milk products from the diet is the therapy of choice.

Milk is a source of high quality protein, but dogs and cats after weaning, like other mammals, have a low lactase activity. Therefore, other protein sources should be used to satisfy demands. Lactose-free cat milk is a good alternative for cat owners wanting to offer milk to their cats.

There is no official definition for grain-free in feed legislation and this term overlaps with the terms, low carb, wheat free and gluten free.

Some owners are in favour of pet food without grains because, in their view, it reflects the original nutrition of dogs and cats in a more appropriate way. It is often claimed that dogs and cats are unable to digest grains and that feeding grains will cause various diseases such as allergies and cancer. Consequently, pet owners selecting grain-free diets believe that it is healthier for their pets.

Raw whole grains are indeed difficult to digest, but carbohydrates from properly cooked starch are a highly digestible source of dietary energy. Providing energy in the form of starch frees up dietary protein and fat to be used for tissue development and maintenance and metabolic processes. It has to be noted that manufactured grain-free diets are not usually starch- or gluten-free and contain alternative carbohydrate sources, such as potato starch. Grains are also a good source of dietary fibre, which are beneficial for a healthy digestive function.

The risk of allergies associated with grains is, in contrast to the perception of many pet owners, rather low. Grains rank below animal proteins as a primary cause despite being used much more often in pet food[2][3][4][5].

In summary, there is nothing known currently about potential health-benefits of grain-free diets or their preventative usage to reduce the risk of allergy development.

Free from additives is a trend from human nutrition. The use of additives is increasingly criticised by owners because some believe them to be a primary cause of diarrhoea, allergies, cancer or pseudo-allergies.

Important: Additives are not toxic or harmful based on levels approved for their use in either pet foods or human foods. All additives have to be assessed on safety and registered prior to use. Expert panels at EFSA (European Food Safety Authority) for example, are carefully evaluating the safety and efficacy of additives as part of the authorization process. ADI (Acceptable Daily Intake) levels are derived from animal testing, which provides safe levels for daily long-term consumption.

Functional groups (based on European legislation[6]) of additives comprise:

Preservatives like potassium sorbate help protect feed against deterioration caused by microorganisms such as bacteria, yeast, mould or their metabolites.

In wet pet food, the addition of preservatives is not needed as the packed and sealed product (pouch, can, trays) undergoes sterilization. A free from preservatives claim on such a product therefore is not adequate because of two aspects, i.e. firstly preservatives are not needed due to the nature of the manufacturing process and secondly it is not a unique feature of the product as it applies to all other products in the same category in the market.

Dry pet foods with controlled levels of available water (aW value) do not need preservatives either as there is not enough water for microorganisms to grow.

"Genetically Modified Organisms" carry a novel DNA that has been assembled artificially from DNA of different organisms.

Humans have been genetically modifying food through selective breeding processes for thousands of years. The “GMO” label identifies organisms that have undergone Genetic Engineering (GE) techniques in order to obtain desirable characteristics. However, it has to be noted that organisms that have been developed through other techniques such as chemical or radiation mutagenesis are not considered GMO.

There is no scientific evidence to support any issues with consuming GMOs or consuming animals that have eaten GMOs. Nevertheless, many consumers are concerned about GMOs in their food and, given the choice, would select a GMO-free food.

In Europe, pet food manufactured with GMO materials has to be labelled “contains GMO” or “produced from GMO”; if not labelled, a GMO contamination of up to 0.9% is tolerated[7][8]. This is regarded as being unavoidable due to global handling and shipping of raw materials. However, when claiming ‘free from GMO’ the 0.9% tolerance is replaced by zero tolerance. 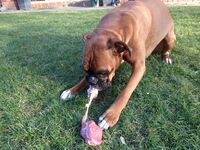 B.A.R.F. stands for ‘bones and raw food’ and denotes a feeding regimen based on the dietary habits of the wolf and feral cats with the aim to mimic the composition of natural prey as much as possible. All components are fed raw. Cereals are not considered a classical component of B.A.R.F. rations as they are found only in small amounts in the gastrointestinal tract of prey and, like other starch-based feed materials, are only digestible after cooking. Main components are raw meat, offal and bones supplemented with oils, fats, fruits and vegetables. Although this allows the pet owner to provide a varied diet adapted to the pet’s preference, care has to be taken in several aspects such as nutritional imbalance and hygiene for both pet and owner when handling raw meat[9]. 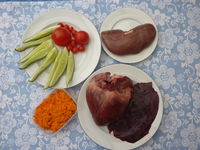 Home-made diets comprise self-prepared cooked diets as an alternative for pet owners who do not want to handle and feed prey or raw meat. This feeding form allows owners under the supervision of a qualified veterinary nutritionist to adapt the diets to the preferences or dietary requirements of pets and to individually select components. Cooking is advantageous compared to raw food with regards to spoilage and food safety. The cooking process allows inclusion of starch-based components such as potatoes, pasta or cereals; however, the heating process can lead to nutrient losses. Such losses as well as general nutrient imbalances require appropriate supplementation in addition to food.

Depending on the allowed inclusion of materials of animal origin, different sub-types of vegetarianism can be defined, i.e.

An ovo-lacto vegetarian diet is advantageous for dogs and cats as eggs and milk products will add essential amino acids from animal proteins.

In vegan diets, however, the use of any material of animal origin is rejected and only plant-based materials are permitted.

Regardless of vegetarian or vegan regimen, dogs and cats are fed diets devoid of meat and subsequently, may be deprived of important nutrients that are only present in meat. In addition to the deficiencies commonly observed in home-prepared or B.A.R.F. diets, other vegetarian-vegan related potential deficiencies have to be taken into account. Cats are at particular risk in several aspects. The carbohydrate acceptance and digestive capacity in cats is limited compared to dogs. The metabolism of cats is adapted to utilise high amounts of protein with a high total protein requirement. Cats are unable to synthesize certain nutrients from precursors present mainly in meat, e.g. arachidonic acid (fatty acid), arginine, taurine (amino acids), vitamin A and B3 (niacin). For vitamin D and B12, this is the case for both dogs and cats.

A nutritionally complete vegetarian diet can only be achieved if the diet is carefully supplemented with specific nutrients (often synthetically made), particularly during periods of increased demand such as growth, gestation and lactation.

Paleo is a human food trend increasingly observed in pet nutrition. The philosophy is based on mimicking the nutrition of ancestral dogs and cats during evolution. It is assumed that this form of nutrition addresses nutritional requirements in an optimal way and, hence, supports peak metabolic performance of dogs and cats. Paleo diets are rich in protein with low carbohydrate content, which is achieved via a high meat content. In contrast to B.A.R.F., feeding ingredients raw is less relevant. B.A.R.F. is considered a pure pet nutrition trend, whereas paleo is a human nutrition trend and people typically do not consume large quantities of raw meat. Pet owners practicing paleo tend to be health conscious and convinced that old days were generally better, including the type of nutrition[11]. They are searching for a primitive form of nutrition.

Primary motivations to practice paleo can be described as follows:

However, around 14,000 years of domestication has elapsed between the ancestral wolf and the modern pet dog over which time social behavior, appearance and feeding habits have changed substantially. This time has even influenced gene expression, and modern dogs have been found to be capable of digesting and utilizing starch compared to the wolf[12]. Hence the nutrient requirements of wolves are no longer ‘up-to-date’ for modern pet dogs. Cats by contrast have deviated less from the nutritional preferences of their ancestors during evolution. A paleo type of diet, therefore, may be less inappropriate for cats than for dogs, given the higher protein requirements of cats.