What is Vitamin D (Cholecalciferol)?

Vitamin D is an essential fat-soluble vitamin. It is found in the diet in one of two forms: animal-derived vitamin D3 (cholecalciferol) or plant-derived vitamin D2 (ergocalciferol). Both forms are incorporated into mixed micelles with dietary fat and absorbed by diffusion across the mucosal surface of the small intestine. Absorbed vitamin D is released into the lymphatics for transport to the liver, where it undergoes the first of two hydroxylation steps. From the liver, vitamin D is then transported to the kidney for the second and final hydroxylation step to form calcitriol. Calcitriol is the biologically active form of vitamin D that facilitates calcium balance in the body. Humans are able to synthesise vitamin D by conversion of 7-dehydrocalciferol (a precursor to cholesterol) to cholecalciferol when skin is exposed to ultraviolet (UV) radiation, but neither dogs or cats are able to synthesise adequate levels of vitamin D with UV exposure[1] due to high 7-dehydrocalciferol-Δ7 reductase activity[2].

Vitamin D plays a key role in the regulation of Ca and P homeostasis. 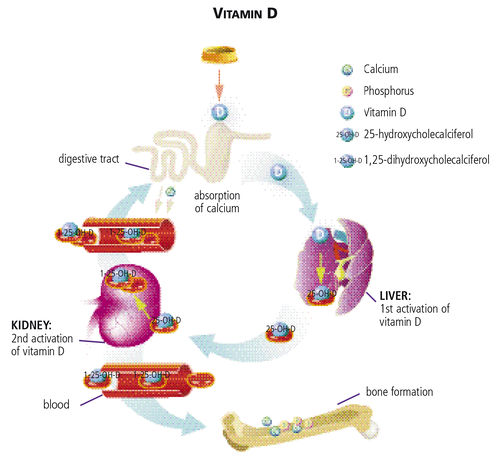 Vitamin D toxicity from ingestion of natural foodstuffs is uncommon in dogs and cats, but can be seen with accidental exposure to cholecalciferol rodenticides[10][11], excess supplementation of the diet[12], or from formulation errors in the manufacture of commercial pet foods[13]. Clinical signs of vitamin D toxicity in both dogs and cats include vomiting, diarrhoea, polyuria, and polydipsia and are related to excess calcium absorption and resultant hypercalcaemia.

Cholecalciferol is found in animal liver, fatty fish (e.g. herring, salmon, and mackerel), and fish liver oils; dark green leafy vegetables (e.g. kale and spinach) contain ergocalciferol though at concentrations that are inadequate to meet daily requirements without supplementation. Vitamin D is supplemented into milk and milk products in the United States, but this is not consistent across the global milk industry.
Commercial dog and cat foods intended to be complete and balanced are fortified with cholecalciferol to ensure adequate Vitamin D intake.