What are Omega-6 Fatty Acids?

Omega-6 fatty acids are a family of polyunsaturated straight-chain hydrocarbons that have a double bond in the sixth carbon-carbon bond (n-6) when counted from the methyl end of the molecule. Linoleic acid contains 18 carbons with double bonds at both the n-6 and n-9 positions (written as 18:2n-6). It undergoes further desaturation by hepatic Δ-6 desaturase to form gamma-linolenic acid (GLA; 18:3n-6), which is elongated and desaturated once more to form arachidonic acid (AA; 20:4n-6). Linoleic acid (LA) is considered an essential fatty acid in both dogs and cats. Dogs are able to convert adequate amounts of LA to AA to meet requirements at all life-stages[1], cats however have limited hepatic Δ-6 desaturase enzyme activity[2][3][4] and require a dietary source of AA to meet their metabolic needs. The dietary requirement for LA in cats is lower than dogs because LA is not used as a precursor for synthesis of AA.

Why are they Important?

Linoleic acid is concentrated in the skin and hair coat of cats and dogs to form the normal water permeable barrier of the epidermis[5]. Arachidonic acid is incorporated into the lipid bilayer of all cell membranes; it serves both as a structural component of cell walls and a precursor to normal inflammatory mediators[6]. Increased intake of LA above the minimal requirement may help improve skin and coat quality in dogs and cats[7][8]. Modification of AA intake in relation to specific omega-3 fatty acids has been suggested as an aid in the management of inflammatory condition (such as allergic dermatitis, nephritis, or inflammatory bowel disease) in dogs and cats[9]. Omega-6 and omega-3 fatty acids compete for the same metabolic enzymes; as such the total amount as well as the ratio of omega-6 to omega-3 fatty acids is an important consideration when evaluating dietary balance or when attempting to modify concentrations of these nutrients for health and disease management. 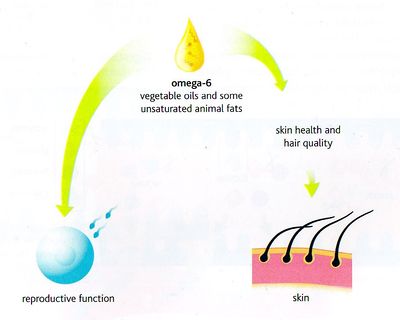 Role of omega-6 fatty acids in the body

There is speculation that increased intake of omega-6 fatty acids with inadequate omega-3 fatty acids intake may promote a pro-inflammatory state[9], but research evidence to support this is lacking in dogs and cats.

Depending on what is fed during production, animal fats (associated with muscle meat, organ meat, and eggs) have varying LA concentrations; animal fats are good sources of AA. Seed and seed oils are more consistent sources of LA. Corn, soy and cottonseed oils have the highest concentrations of LA (approximately 50% of the total fat), while other seed oils are must lower such as flaxseed at 12% LA. Many seed oil crops are also being modified for human health concerns and even those with historically higher levels of LA are being modified to produce less LA and more oleic acid or alpha-linolenic acid[16]. Sunflower oil is an example of this genetic modification. Sunflower oil naturally contains close to 65% linoleic acid content but new genetically modified strains are high in oleic acid with only 3% linoleic acid[17]. Commercial pet food companies monitor levels of essential omega-6 fatty acids in source ingredients, but care must be taken when selecting essential fatty acid sources for home-prepared diets.