Hepatic lipidosis describes a syndrome caused by derangements in lipid and protein metabolism. It occurs in cats, dogs and chelonia but produces a more important clinical syndrome in cats. Similar phenomena occur in horses, donkeys, cattle and sheep when they are exposed to periods of metabolic stress. Hepatic lipidosis may be primary (or idiopathic) or it may be secondary to another disease.

Primary or idiopathic hepatic lipidosis is most commonly recognised in obese indoor cats following a period of anorexia or stress. It is the most common hepatic disease of cats in North America but it is becoming more common in Europe. It occurs due to the accumulation of large amounts of lipid in hepatocytes, altering the morphology of the cells and producing an acute hepatopathy. The mortality rate of this disease is high unless it is treated aggressively.

The lipid that accumulates within hepatocytes is composed of triglyceride which is synthesised from circulating fatty acids in the liver. Circulating fatty acid concentrations are regulated by a number of hormonal factors that act on the enzymes hormone-sensitive lipase (HSL) and lipoprotein lipase (LPL). HSL is responsible for releasing fatty acids from adipose tissue and its action is stimulated by catecholamines, glucagon, corticosteroids and thyroid hormones but inhibited by insulin. LPL degrades circulating lipoprotein complexes allowing fatty acids to be taken back up into adipose stores. The liver and other tissues usually oxidise fatty acids via the Krebs cycle within mitochondria but this pathway is downregulated in animals that receive excessive dietary calories. Additionally, hepatocytes are able to package fatty acids into very low lipoprotein complexes (VLDLs) that are released back into the circulation. If the apolipoproteins that partly constitute the VLDLs are deficient, fatty acids may not be dispatched from the liver. The accumulation of triglycerides in the liver reflects an imbalance between the processes that cause lipid mobilisation, those that lead to fatty acid oxidation and dispatch and those that encourage storage in adipose tissue. One or more mechanisms may be involved and these include increased activation of HSL by catecholamines released in response to stress, failure to produce sufficient insulin (in diabetes mellitus) results in uncontrolled HSL activity and excessive lipid mobilisation induced by anorexia, starvation or illness, partly under the influence of glucagon on HSL. Deficiency of dietary proteins and other nutrients, which reduces the capacity of the liver to produce lipid transport (apolipo-)proteins and to metabolise fat. Recognised micronutrient deficiencies include arginine, carnitine, taurine and methionine. Carnitine has a vital role in carrying fatty acids across the inner mitochondrial membrane and also disturbances in the neural and hormonal mechanisms that control appetite and satiety resulting in inappropriate anorexia, are other factors.

Secondary hepatic lipidosis is a neuroendocrine response to other diseases, including pancreatitis, diabetes mellitus, inflammatory bowel disease and primary hypertriglyceridaemia. Secondary hepatic lipidosis is therefore less closely associated with obesity and it may be seen in normal or even thin cats. In dogs, this secondary lipid accumulation rarely contributes to the clinical syndrome but in cats, it may greatly exacerbate the disease suffered by the affected animal. Secondary lipidosis is much more common than primary in cats in the UK.

Indoor and obese cats are more prone to the development of primary hepatic lipidosis during periods of stress or anorexia. Most cases occur in middle-aged cats with no apparent breed predisposition.

The development of hepatic lipidosis in chelonia is most commonly a consequence of feeding a high fat diet such as commercial pet food, so there are no age, breed or sex predispositions. 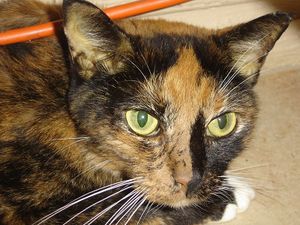 Image of a jaundiced cat that was suffering from hepatic lipidosis. Note the icteric pinnae.
Copyright Sabar 2007 Wikimedia Commons

Clinical signs may appear to be non-specific at first. These include severe persistent anorexia with lethargy. Cats may lose weight and have an unkempt appearance.Jaundice may or may not occur. It is a form of intra-hepatic icterus as the swollen hepatocytes partially obstruct the flow of bile in the canaliculi. Hepatic encephalopathy may manifest mainly as depression and hypersalivation. Diarrhoea and vomiting do not occur with all cases of hepatic lipidosis. Palpable hepatomegaly may be appreciable as the liver enlarges with the storage of lipid in hepatocytes. Coagulopathies sometimes occur in affected animals and may manifest as spontaneous subcutaneous, intra-articular or intra-cavitatory haemorrhage. The syndrome develops due to reduced absorption of vitamin K or failure to reclaim vitamin K in the liver due to diffuse hepatic disease.

Affected animals may have red blood cells of varying morphology (poikilocytosis) and this may be related to alterations in erythrocyte membrane lipid content. Cats with hepatic lipidosis are also prone to the development of Heinz body anaemia and haemolysis due to hypophosphataemia.

Cholestatic enzymes are usually elevated due to intra-hepatic cholestasis but the exact pattern observed varies between species. In cats, an elevated concentration of ALP is more sensitive for the detection of hepatic lipidosis and this enzyme is often greatly elevated while the level of GGT remains normal. In dogs, an elevated serum concentration of GGT is more sensitive than ALP for the detection of hepatic lipidosis.

Hyperbilirubinaemia often occurs and this may be clinically evident as icterus.

Animals that have been inappetant for some time or which have vomited recently are likely to be hypokalaemic and it is important that this deficiency is treated for the patient to regain voluntary intake of food. Animals with hepatic lipidosis often become hypophosphataemic but this may only occur with refeeding as the blood concentrations of glucose and insulin rise, driving phosphate intracellularly. A similar phenomenon occur when animals with diabetic ketoacidosis are first treated with insulin.

Where this is available, proteins produced in the absence of vitamin K (PIVKAs) and clotting times may be measured to determine whether the animal has a coagulopathy.

Urinalysis may reveal bilirubinuria as the serum bilirubin concentration is increased as in any cholestatic disease.

Cats with hepatic lipidosis often become deficient of vitamin B12 (cyanocobalamin), especially if they also suffer from inflammatory bowel disease or pancreatitis.

Plain radiographs of the abdomen usually show only marked hepatomegaly with a right shift of the gastric axis when viewed on a right lateral film. The borders of the liver lobes will be rounded and extensive intra-abdominal fat reserves may be evident in obese cats giving excellent serosal detail. 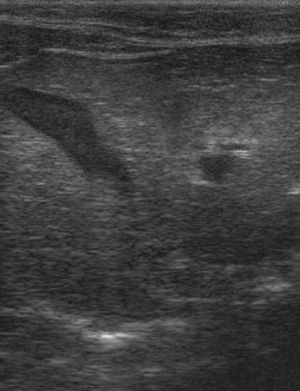 Ultrasonographic image of a feline liver affected by hepatic lipidosis. The liver has a similar echogenicity to the surrounding fat.
Copyright Kalumet 2009 Wikimedia Commons

An abdominal ultrasound scan will reveal an enlarged and diffusely hyperechoeic liver. The underlying cause of the liver disease may also be apparent. 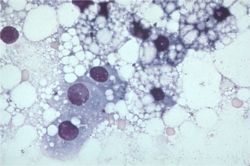 Histological image of a section of liver with lipidosis. Note the many vacuoles that push the hepatocyte nuclei aside.
Copyright Karin Allenspach 2008 RVC

Grossly, the liver will appear to be enlarged with rounded edges. The tissue may be white/yellow in colour and the cut surface will be uniform and greasy to handle.

Fine needle aspiration of the liver (preferably under ultrasound guidance) is often sufficient to make a diagnosis of hepatic lipidosis. Cytological examination of the sample reveals that the hepatocytes are swollen with lipid (cytoplasmic vacuoles) which pushes the nuclei aside. Where possible, biopsy of liver tissue and aspiration of bile are indicated to determine the underlying cause of the disease. 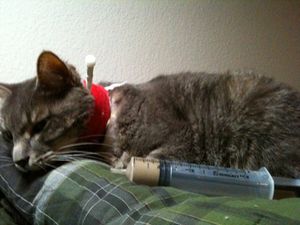 Intensive treatment of cats is required as the disease has a high mortality if not managed aggressively. Owners should be warned that long-term nutritional support will be required to achieve a successful outcome. In cases of secondary lipidosis, the underlying cause of disease should be treated.

Nutritional Support is generally required for a period of 4 - 6 weeks but longer durations may be necessary if the animal fails to eat voluntarily. The two major considerations are the route of feeding and the composition of the diet that is fed.

Naso-oesophageal feeding tubes may be used temporarily to stabilise affected animals but this type of tube is likely to discourage voluntary feeding and it may traumatise the oesophagus. Oesophagostomy tube or gastrostomy tubes are better suited to long-term management of patients with hepatic lipidosis and both may be placed during a short general anaesthetic. Gastrostomy tubes may be placed under endoscopic guidance and these represent the best option if the animal has evidence of oesophagitis or chronic vomiting.

Composition of the Diet

The fat content of the diet should be restricted to limit post-prandial hypertriglyceridaemia and the carbohydrate content should be limited as high concentrations will reduce the oxidation of fatty acids. In cats, a diet of the highest possible protein content is indicated unless the animal is showing signs of hepatic encephalopathy. Even in this situation, it is preferable to attempt to manage the signs of encephalopathy medically while continuing to feed a diet with a moderate protein content.

Specific nutrients such as arginine, taurine, or carnitine may also be added and there is some evidence to suggest that carnitine supplementation may be beneficial in cats with hepatic lipidosis. B vitamins, particularly B12 in cats, should be supplemented if they are thought to be deficient. Antioxidants (including s-adenosyl methionine (SAMe) and vitamin E can be added to the diet to limit oxidative Heinz body anaemia that occurs with hepatic lipidosis and to limit inflammatory liver pathology.

This syndrome should be treated specifically if it occurs.

Episodes of vomiting may cause dehydration and electrolyte imbalances and it is therefore important that this is prevented. Maropitant (an NK1 receptor antagonist) is often used as an anti-emetic as it has both central and peripheral actions and this is often combined with ranitidine which acts as a gastric acid secretory inhibitor and a prokinetic (by preventing the degradation of intestinal acetylcholine). Ranitidine or metoclopromide may also be appropriate if the vomiting is thought to result from delayed gastric emptying or intestinal ileus.

Intravenous fluid therapy is often warranted in the early stages of disease when the patient is likely to be dehydrated and to have marked electrolyte imbalances. Blood glucose concentration should be monitored but supplementation with dextrose solutions should be sparing as this is likely to inhibit fatty acid oxidation. Of the electrolytes, potassium and chloride are most likely to be deficient at presentation and potassium should be supplemented if its concentration can be measured regularly. As feeding is introduced, hypophosphataemia may occur as part of a refeeding syndrome and this should be supplemented as necessary.

Supplementation with vitamin K may be required by subcutaneous injection if the coagulopathy is significant.

This is dependent on the underlying cause and the way in which the patient is managed. If treated appropriately, 85% of severely affected animals will recover. In cats this percentage is only around 50%.