What are Omega-3 Fatty Acids? 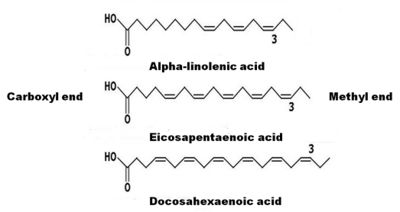 Omega-3 fatty acids are a family of polyunsaturated straight-chain hydrocarbons that have a double bond in the third carbon-carbon bond (n-3) when counted from the methyl end of the molecule. Only plants have the ability to add double bonds in the n-3 position. There is speculation that fatty acids belonging to the n-3 family, specifically alpha-linolenic acid and docosahexaenoic acid, exhibit essential fatty acid activity in dogs and cats.

Alpha-linolenic acid (ALA) is an 18 carbon chain with double bonds at the n-3, n-6 and n-9 positions (written as 18:3n-3) that accumulated in skin phospholipids;[1] docosahexaenoic acid (DHA) is a 22 carbon chain with doubles bonds at the n-3, n-6, n-9, n-12, n-15, and n-18 positions (written as 18:6n-3) that accumulates in the retina during growth and development.[2] Alpha-linolenic acid undergoes an initial desaturation by hepatic Δ-6 desaturase followed by elongation and another desaturation to form eicosapentaenoic acid (EPA; 20:5n-3).[3] Dogs have the ability to convert modest amounts of ALA to EPA and supplementing with dietary ALA has been shown to increase plasma EPA levels in dogs;[4] cats are unlikely to synthesise significant amounts of EPA from ALA given their limited hepatic Δ-6 desaturase enzyme activity.[5] Eicosapentaenoic acid is further elongated to form docosapentaenoic acid (DPA), which is released into circulation and taken up by the retina and brain where it is converted to docosahexaenoic acid (DHA).[6],[7]

Why are they Important?

Alpha-linolenic acid works in conjunction with linoleic acid (LA) to help maintain skin and hair coat quality;[8] EPA is incorporated into the lipid bilayer of cell membranes along with arachidonic acid (AA) and may dampen inflammatory reactions;[9] DHA is conditionally essential for normal brain and retinal development in puppies and kittens.[2][10][11]

Omega-6 and omega-3 fatty acids are in competition for the same metabolic enzymes and the ratio of omega-6 to omega-3 fatty acids as well as the total amount of each polyunsaturated fatty acid is an important consideration when evaluating dietary balance or when attempting to modify concentrations of these nutrients for health and disease management.

Excess intake of ALA without a concurrent increase in LA resulting in a ratio below 2.6:1 (LA:ALA) may interfere with LA uptake into ceramide and the conversion of LA to AA,[2] but toxicity studies are lacking.

Excess EPA intake can cause platelet abnormalities and bleeding disorders in cats,[24] though this effect has not been demonstrated in dogs[25]. Dogs fed excessive amounts of the omega-3 long-chain polyunsaturated fatty acids, EPA and DHA, have shown impaired wound healing[26][27] as well as impaired cellular immunity.[28]

Specific seed and seed oils have varying concentrations of ALA; for example flaxseed oil provides 50% of the total fat as ALA while rapeseed (i.e. canola oil) provides 20% ALA[29]. Terrestrial animal fats (associated with muscle, organ meat, eggs) are poor sources of ALA. Cold-water algae produce high concentrations of DHA, which is converted to EPA by marine fish after consumption; there is variation in EPA concentration between wild and farmed fish species. Recommendations for optimal ratios of omega-6 to omega-3 fatty acids are provided to pet food manufacturers, but an optimal amount of ALA has not been determined. Diets with higher levels of polyunsaturated fat (ALA, EPA and DHA) are prone to oxidative damage and require larger concentrations of dietary antioxidants to prevent rancidity (fat oxidation) during processing and storage.

Diagnosis of ALA and DHA deficiency is difficult to make clinically and evaluation of diet is often used to demonstrate inadequate intake. Plasma lipid profiles may show low circulating concentrations of ALA and DPA though normal reference intervals have not been established.