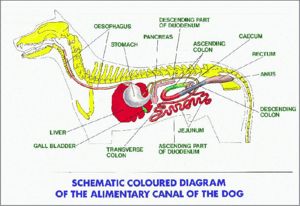 The anatomy of the alimentary system begins rostrally with the oral cavity, which is the first section of the alimentary tract that receives food. It provides the digestive functions of prehension, mastication and insalivation and also plays a role in the respiratory system through oral breathing when the nasopharynx is impaired. The oral cavity or mouth, includes accessory structures - the salivary glands, projecting structures - the teeth and tongue, and the boundaries enclosing the oral cavity; the lips, cheeks, soft and hard palates, and the oropharynx. In anatomical terms, the oropharynx is common to both the alimentary and the respiratory system, and the hard and soft palate forms the boundary between the oral and nasal cavities in many species.

Food passes from the oral cavity into the oesophagus and from here to the stomach. In evolutionary terms, various adaptations to the anatomy of the stomach reflect the digestive needs of the species based on their natural diet. The ruminant stomach for example, is composed of 4 separate compartments; the rumen, the reticulum, the omasum and the abomasum. The first three compartments are adapted to digest complex carbohydrates with the aid of microorganisms which produce volatile fatty acids - the major energy source of ruminants. The last compartment, the abomasum resembles the simple monogastric stomach of a carnivore in structure and function. As a further adaptation, the oesophageal groove is present in newborn ruminants; it is a channel which directs milk from the oesophagus into the rumen, omasum and then abomasum, bypassing the reticulum.

The large intestine begins at the caecum, and includes the colon, the rectum and the anus. Water, electrolytes and nutrients are absorbed which concentrates the ingesta into faeces. There is no secretion of enzymes and any digestion that takes place is carried out by microbes. All species have a large microbial population living in the large intestine, which is of particular importance to the hindgut fermenters such as the horse. For this reason, hindgut fermenters have a more complex large intestine with highly specialised regions for fermentation. The volatile fatty acid products of microbial fermentation are absorbed in the colon.

The stomach, small intestines and large intestines are situatied within the abdominal or peritoneal cavity. The peritoneum is the serous membrane that lines the abdominal cavity; it produces fluid to lubricate abdominal viscera and enhances the immune response and walls off infection in the abdomen to prevent peritonitis.

The Physiology of feeding

Different hormones, neurotransmitters and reflexes are involved in the complicated process of feeding in animals. Secretions and motility of the gastrointestinal tract are stimulated and carefully regulated by numerous factors, including environmental stimuli and the presence of food in different parts of the gastrointestinal tract, which is detected by chemoreceptors and mechanical receptors. Motility is modified by both intrinsic and extrinsic nervous sytems, and neurological reflex mechanisms prevent food from accidentally passing into the trachea during deglutition, or swallowing.

When a harmful substance is ingested the body acts to eliminate it in different ways to prevent the animal becoming ill, for example, through vomiting or diarrhoea. If one or more of the neuroendocrine pathways involved with the control of feeding is damaged or inhibited, then problems such as obesity can occur.

There are many species differences in the phsiology of feeding, from different feeding methods to adaptations during the digestive process such as additional cycles of mastication which is seen during rumination and eructation.

The avian alimentary system differs immensely from the basic mammalian design. Food can move in a retrograde fashion from the proventriculus to the crop. Food can also pass from the gizzard, which is the equivalent of a muscular stomach back into the proventriculus, or glandular stomach depending on particle size. The egestion of bones occurs once the nutritious material has been ingested. During reflux, gastric motility is inhibited and the pellet is expelled through the oral cavity by oesophageal antiperistaltis. This cleans the crop out and checking the pellet of captive birds should be undertaken daily to assess health.

The avian intestines shows some species specific anatomical variety, and the hindgut of the avian digestive system differs from mammalian anatomy as it terminates in the cloaca. The external opening through which faecal matter and uric acid is excreted is called the vent. The shape of the vent varies depending on species. Avian species vary in the presence or absence of a gall bladder, and the avian liver differs from the mammalian liver, being bilobular.

Test yourself with the Alimentary Flashcards